By: @demigoddesspictures
Friday the 13th, 2015, Los Angeles, California (DGC)-
What comes to mind when one hears Port Arthur? Unless you do a quick Google search, probably not much. Surrounded by mostly water, Port Arthur is a small oil refinery town in Texas, composed mostly of the Sabine Lake which drains some 50,000 square miles of Texas and Louisiana into the Gulf of Mexico aka The Dead Zone. A man-made island was created by Arthur Stilwell in the early 19th century to support his Channel and Dock Company when oil was discovered in the region, making Port Arthur the center of the largest oil refinery network in the world. But, with corporate challenges in the oil industry, fueled by environmentalist and a few unscrupulous hurricanes, Port Arthur never really ascended into much more than a stagnate smelly sulfurous port.

In 1943 however, a renowned product of raw energy manifested in Port Arthur that would prove to be a much bigger life force than crude oil, captivating millions of people around the world and making them take pause and behold, the natural phenomenon of an unprocessed and organic shear truth. Her name was Janis Joplin.
“Janis: Little Girl Blue”, the feature film documentary by the Oscar-Nominated filmmaker Amy Berg, had it’s world premiere at the Venice Film Festival and has since screened all over the world, including inside the Bing Theatre at LACMA on November 13th, 2015, sponsored by Film Independent and The New York Times. Based on hand-written letters that were written by Janis herself to her family during her meteoric rise from small town girl into one of the most revered iconic rock ‘n’ roll singers of all time, “Janis: Little Girl Blue”, is an organic, unflinching story about a woman who was driven by universal forces beyond even her own control.

Berg executes a compelling narrative, documenting Joplin’s life story for the first time on film through electrifying archival footage of live performances on stage and through intimate interviews with friends and family. Joplin’s younger sister, Laura Joplin, whose uncanny facial features, soft southern drawl and hair texture eerily resemble her well-known sister, made a guest appearance at the end of the screening during Q & A with director Amy Berg.

Musician and actress Chan Marshall delivers an excellent voice-over performance as Janis herself, narrating the documentary through Janis’s own letters. FilmRise acquired U.S. distribution rights in October 2015.
Janis Joplin represents the ultimate female divine, unapologetic in her raw power and sexuality, yet vulnerable and nurturing. She is everything that young women can aspire to be like; motivated by the desire for achievement and be set with a temperament to conquer paternal authority that often oppresses females who dare to dream.

Amy J. Berg, is an American film maker of Jewish descent, best known for her Academy Award-nominated documentary Deliver Us from Evil (2006). Deliver Us from Evil is about sex abuse cases in the Roman Catholic Church, focusing on Oliver O’Grady, who abused many children in California between the late 1970s and early 1990s. Berg grew up in the San Fernando Valley and lives in the Venice Beach neighborhood of Los Angeles, California.
For a complete list of Berg’s movies, click HERE 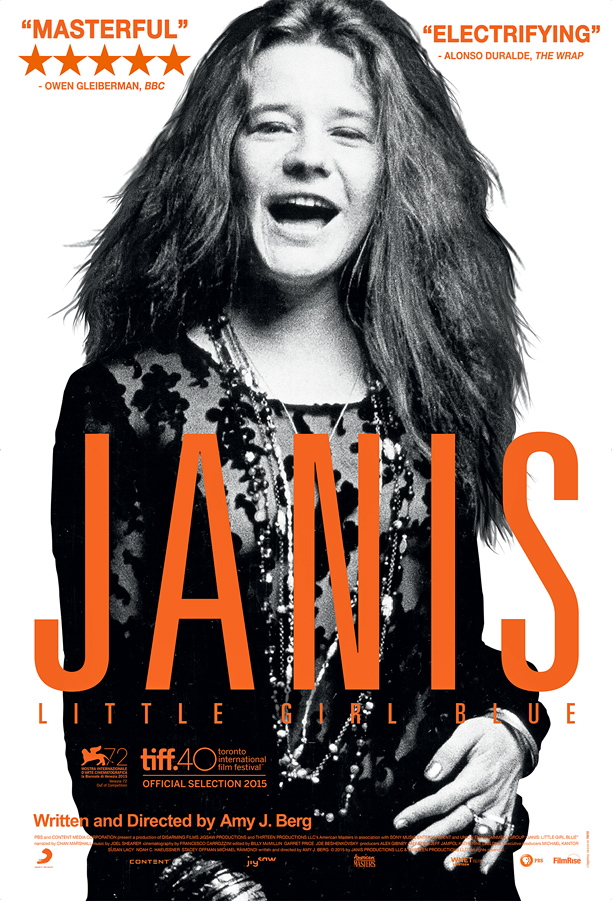